FAIRHAVEN, Mass. (Aug. 24, 2017) – The new line of Titleist 718 irons – featuring the powerful distance and ultra-forgiveness of AP1, the tour-proven consistency of AP2, and the introduction of AP3, the longest, fastest Titleist players iron ever – provides dedicated golfers with the breakthrough technology and proven performance that have made Titleist the #1 iron on the PGA Tour since 2005.

“Golfers trust Titleist to design and manufacture the premier irons in the game and not make any sacrifices,” said Josh Talge, Vice President of Marketing, Titleist Golf Clubs. “Our R&D team is relentless when it comes to improving iron performance and engineering new technologies into head profiles that look, sound and feel great. The invention of AP3, which combines the distance and forgiveness of our best-selling, game-improvement AP1 iron with the look and feel of our tour-favorite AP2, is a significant advancement that will help a wide range of golfers, and further illustrates why more of the world’s best players have Titleist irons in their bags.” 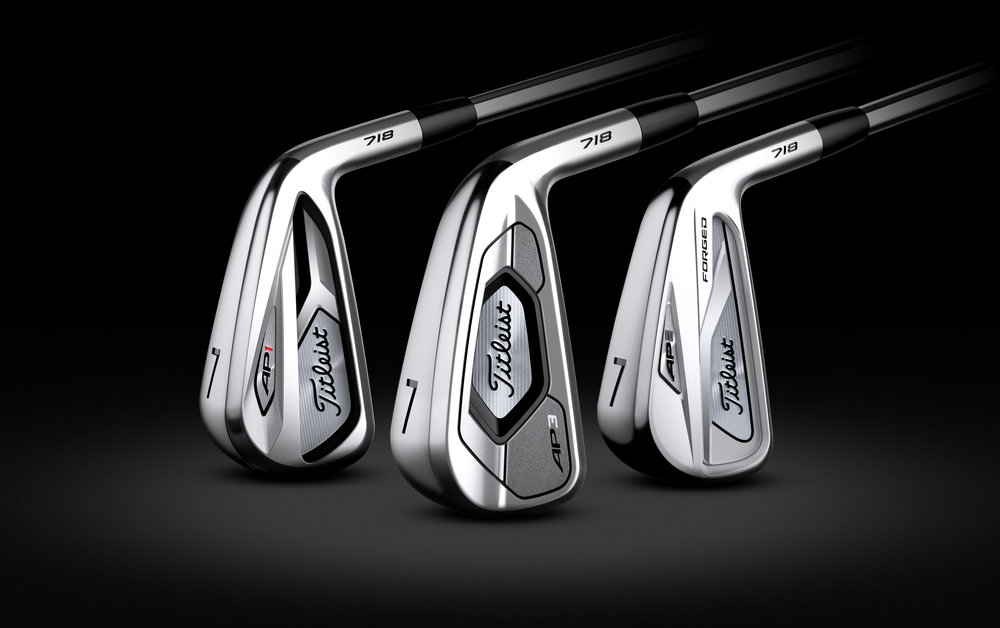 Beginning Sept. 1, golfers can experience the performance of Titleist 718 irons by attending a Titleist Fitting and Trial event (including Titleist Thursdays), being held at hundreds of locations nationwide. To find an event, or book a free 718 iron fitting with a Titleist Product Specialist, golfers can visit www.titleist.com/718.

“718 is about maximizing MOI and ball speed, while maintaining the proper launch, trajectory and shot-stopping control that players need to hit greens more consistently. Irons are scoring clubs. It’s about hitting your number and stopping the ball close to the pin. Even with distance-focused irons like 718 AP1 and AP3, which are just as long or even longer than the competition, the ultimate goal was playable and repeatable distance. When it comes to hitting a good iron shot, distance without control is meaningless.”

New 718 AP1 irons are built for maximum distance and maximum forgiveness. Longer and more forgiving than the prior generation, 718 AP1 irons combine classic Titleist look and feel with the game’s most advanced game improvement technology to produce an iron that is easy to hit, get in the air and stop on the green quickly. “Titleist has an iron for every dedicated golfer, and that starts with 718 AP1,” Talge said. “There’s no better option in the game improvement iron category.”

The all-new 718 AP3 is the player’s distance iron. An innovative hollow-blade design with high-speed face technology, AP3 merges everything R&D has learned from creating and advancing AP1 and AP2 irons to produce the longest, fastest Titleist player’s iron ever. “AP3 truly represents the best of both worlds,” Talge said. “We’re giving you the distance and forgiveness of a game improvement iron packed into the look and feel of a player’s iron.”

AP3 was also inspired by the development of Titleist Concept C16 irons, which taught R&D how to engineer breakthrough distance and forgiveness into a player preferred, smaller footprint.

New 718 AP2 continues to raise the bar, improving upon the technology and performance that have made AP2 the gold standard of modern tour irons. The co-forged, cavity back design provides ultimate playability with consistent distance and forgiveness, packaged in a tour-validated profile that delivers pure forged feel. “AP2 is the most popular tour iron globally because it combines the look and feel tour players demand with the precise distance control they need to consistently hit their target, shot after shot,” Talge said. “For everyone else, it’s the tour iron within reach, because it is so forgiving.”

The ultimate utility iron, 718 T-MB has grown into a full set of uniquely designed irons that deliver effortless distance at every loft in a technical, muscle-back shape. Initially developed as a high launching, player’s long iron, the hollow-body, multi-material design of T-MB produces a powerful combination of high launch and forgiveness with a playable trajectory. “T-MB is an absolute workhorse that launches high and just keeps going,” Talge said. “Players can’t believe the performance they get out a club that from address looks like a classic muscle back.”Advanced hollow-back construction with thin, unsupported L-Face insert allows the face to flex more at impact, increasing launch and speed for more distance.

A classic muscle back designed for today’s game, new 718 MB is the modern choice for those players desiring maximum shot control with a traditional forged look and feel.